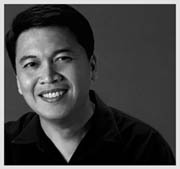 Ted Ramasola finished his degree in Fine Arts with a major in Advertising Arts from the University of San Carlos in the Philippines.

Moving to the United States, he set up Ramasola Productions based in the Dallas area City of Allen in Texas.

He has more than 25 years experience in producing commercials, documentaries, short films, corporate and music videos.

While he has directed several projects, he also works as a cinematographer and as an editor for most of his work.
He also does 3D animation and compositing work for those projects that require it.